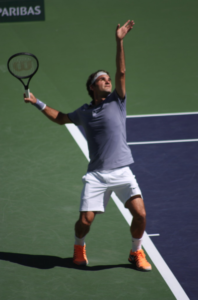 Even if you aren’t a tennis fan you have probably heard of a tennis player named Roger Federer. He has won 17 grand slam titles, more than any other male player. He has been ranked inside the top 10 continuously since May 2002. He won an Olympic gold medal in doubles in 2008 and a silver medal in singles in 2012. The list of his achievements goes on. You get the idea.

Seeing Roger Federer play tennis has been on my bucket list, an item that I crossed off this past weekend when I watched Roger play not once, but twice, at the BNP Paribas tournament in Indian Wells. This experience confirmed three important lessons.

First, hard work pays off. Roger started playing tennis at age 8. Tennis fans worldwide started paying attention when he ended Pete Sampras’ 31-match winning streak at Wimbledon in 2001. As Roger says, “There is no way around the hard work. Embrace it.” That is why Roger Federer makes playing tennis look so easy. And, that is why all of us need to welcome continuous learning, to enhance our skills that will benefit us in work and in life.

Second, enjoy what you do. “You always want to win. That is why you play tennis, because you love the sport and try to be the best you can at it.” We spend a large part of our day at work, taking care of clients, executing projects, mentoring our team. Winners consider why they do what they do and figure out how to rise to the top.

Third, respect is earned. Roger is a gentleman on the court. He plays his game in a quiet, unassuming way. He is a positive influence for the game. He does what is right.  He has fun.   Roger also contributes off the court. The Roger Federer Foundation is committed to empowering African children by providing them with the opportunity for a good education. What do you want people to admire in you? What are you doing to earn people’s respect?

As you can probably tell I am a goal oriented person. I am a list maker. I don’t rely on serendipity, although I do believe that destiny takes into account our hard work, our joy, and our character. Be purposeful in all you do. Take advantage of opportunities. Strive to be the best person you can be.